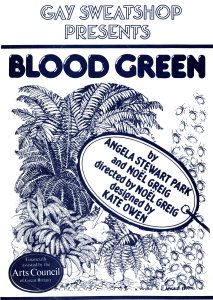 Gay Sweatshop was established in 1975.  Their aim was “to expose the media misrepresentation of the homosexual and to increase general awareness of the oppression of sexuality both homosexual and straight.” (Louise O Shea, Sapphic Stages: Irish Lesbian Theatre, 1974-2000, M.Phil Thesis, Women’s Studies, Trinity College Dublin, September 2000)

According to reports in In Touch, Gay Sweatshop played to “packed 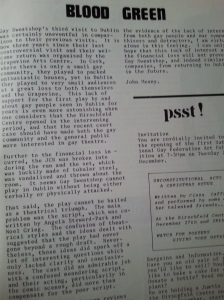 enthusiastic houses” in Cork but to small audiences in Dublin.  The Junior Common Room in Trinity, where the performance was held, was broken into and the set damaged.

Cork LGBT History by Orla Egan is licensed under a Creative Commons Attribution-NonCommercial-NoDerivatives 4.0 International License.
Based on a work at https://corklgbthistory.com/.